Search Results for: hilary and david Tim Jones
Hilary and David, by Laura Solomon (Proverse Hong Kong, 2011), 162 pp., $24.00.
Hilary and David is a novel told in the form of an exchange of letters — though actually, to be fair, since this a 2011 novel it’s told in the form of an exchange of Facebook messages; but they read more like letters, or at least emails, than the fragmentary conversations I tend to have with Facebook friends.
The messages are between Hilary, a young New Zealand woman struggling to raise two children on her own, and David, an English author in his eighties, stubbornly producing books that sell just enough to get his next book published and no more. Hilary’s life is made much more difficult by the fact that her son Wyatt has ADHD (Attention Deficit Hyperactivity Disorder), while Harry has Down syndrome.

END_OF_DOCUMENT_TOKEN_TO_BE_REPLACED 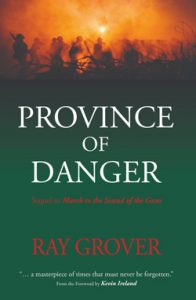 Ray Grover’s latest excursion into narrative history poses an interesting conundrum. Does the reader approach Province of Danger as a work of historical fiction or a narrative history of New Zealand during World War Two? Does the book blend the two or is it merely a work in search of a clear identity?

After reading the sequel to Grover’s widely acclaimed story of World War One, March to the Sound of Guns, I am still undecided. Province of Danger rejects a defining label, especially when historical narrative has become a performance manipulated by the extroverted hands of David Starkey or Simon Schama. END_OF_DOCUMENT_TOKEN_TO_BE_REPLACED David Eggleton
Poetic Explanations, by Gill Ward (Kupu Press, 2011) 86 pp. $15.00; Guarding the Flame, by Majella Cullinane (Salmon Poetry, 2011), 69 pp., $29.95; On a Day Like This, by Jan Fitzgerald (Steele Roberts, 2010), 63 pp.. $19.99; cactusfear, by Douglas Wright (Steele Roberts, 2011), 86 pp. $24.99; Elemental: Central Otago Poems, by Brian Turner (Godwit/Random House, 2012) 240 pp. $39.99; Sometimes the Sky Isn’t Big Enough, by Owen Bullock (Steele Roberts, 2010), 64 pp., $19.99; You Shot My Dog, by Kerry Loughrey 100 pp., $Aus.19.95; Home, Away, Elsewhere, by Vaughan Rapatahana (Proverse, 2011) 208 pp., $30; Knucklebones: Poems 1962 – 2012, by Sam Hunt (Craig Potton, 2012), 360 pp., $39.99.
The voice of the bard, as Seamus Heaney notified us in the title of a series of lectures he gave on poetry, affirms the government of the tongue: that is, the authority of the poetic art to speak on behalf of the tribe, the people – or at least  to speak with the utmost eloquence out of a community.
Gill Ward, a Kapiti Coast poet writes for and to her whanau, her community in Poetic Explanations, a collection of nearly 80 poems that she describes as an ‘autobiography’. In ‘Gathering’, a poem read at the unveiling of her sister’s headstone, she writes: ‘if we could gather every one of those thoughts/…and weave them into a splendid cloak/ we would wrap you in it.’ There’s a whole sequence for this twin sister, who entered a strict religious order when she was 18 before later returning to the secular life, and who died after a lengthy illness.
Ward’s poems seen in the light of this Roman Catholic connection resemble meditations, reflective notes, prayers. They are often, too, presented as valedictions or commemorations, intended for friends and family, as in ‘Kate’, also written for the unveiling of a headstone:
I bought two ranunculus today.
They reminded me of you
with their dazzling yellow and flaming red
flamboyant
uncompromising